After twice completing the Barcelona World Race, the double-handed round the world race on 60-foot IMOCAs, Anna Corbella believes she is ready to take another giant leap to sail solo. In spite of the tight timing, the Spanish sailor is doing her utmost to find a partner and to become the only woman lining up at the start of the next Vendée Globe.

Anna, you are busy looking for the funding to be able to compete in the Vendée Globe?

“Yes, we have some secondary partners, but we still need to find a headline partner, whose name will be given to the boat. We’re looking for a total of one million euros and this headline sponsor will have to invest 700,000 euros. I am optimistic, as I have seen that the project is attracting a lot of interest. The firms can see the media impact they would get from backing the only woman in the race.”

The Vendée Globe is the logical next step for you after two double-handed voyages around the world on an IMOCA, when you finished sixth and third?

“Exactly. I learnt a lot alongside Dee Caffari (in the 2010-2011 race, editor’s note) and Gerard Marin (in 2014-2015). Thanks to these two trips around the world, I feel I am capable of setting sail in the Vendée Globe, particularly seeing I also have experience of solo sailing. In particular, I finished the Mini Transat in 2009 and I enjoyed sailing by myself (laughs). I have attended the start of the Vendée Globe three times and I have always said that one day I’d be out there. The time has come. I feel I am physically, mentally and technically ready. There are times when I think back to some of the tricky moments in the Barcelona and I can imagine facing that sailing alone… It’s not going to be easy and I have the skills that are required to overcome such problems. And I have a strong team with me, professionals whom I trust totally. Otherwise, I wouldn’t think about setting off.” 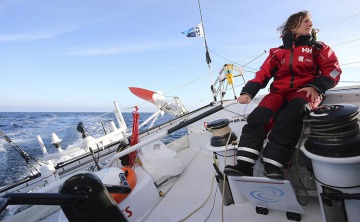 You know what you can expect and you know the way…

“That’s true, but sailing an IMOCA alone is going to be new for me. I have sailed the course twice, but these experiences were very different from each other. The first time, I discovered everything and the chief difficulty was psychological. For my second Barcelona World Race, the rhythm on board was more intense. We pushed the boat harder and suffered a lot of damage. It was very physical.”

The start of the Vendée Globe is less than nine months away. Isn’t the timing too tight?
“There isn’t going to be much time, but I think we can do it. I would have liked to have had more time to prepare. After the second Barcelona World Race, a year ago, the aim was to launch a project for the 2016 Vendée Globe. But ten days before the finish in Barcelona, on the way back up the North Atlantic, my knee was seriously injured (torn ligaments, editor’s note). Seeing how serious the injury was, we decided to postpone the project until 2020, but a few weeks ago, I saw there weren’t any women in the race. I became aware of that at a time when I was getting over my knee injury. So I am making one final effort to find a sponsor. My aim isn’t to win the Vendée Globe, but to complete it conveying the message with the best means of communication.”

“Yes, but I hope that one day, there won’t be the question of how many women are competing. For now though, I can’t stay ashore and see a Vendée Globe starting without a woman. That’s something I cannot imagine. It would be a step backwards, which doesn’t reflect what is really happening in our sport. There are women, who sail in the Figaro circuit and on Minis. In the last Volvo Ocean Race, there was even a 100% female crew (Team SCA, skippered by Sam Davies, editor’s note). A lot of these sailors would love to take part in the Vendée Globe.”

Do you have your eyes on any particular boat?

“No, as for the time being, we’re focusing on getting the budget together. We don’t want to waste time looking for a boat without knowing exactly how much money we will have available. So, it’s one step at a time. But we need a reliable boat, as we’re not going to have much time or money to test her and prepare her.”

Does that mean you could return in 2020 with a more competitive project…
“That is indeed the plan!”

In 2010-2011, 13 Spanish skippers took part in the Barcelona World Race. But none of them lined up for the following Vendée Globe… Can you explain that? 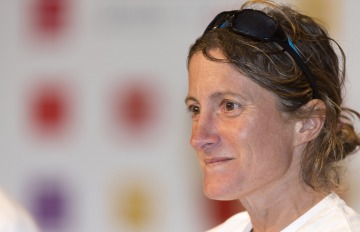 In Spain, firms sponsoring sailing projects are used to benefiting from tax advantages rewarding their commitment. Those advantages do not exist for the Vendée Globe and that really complicates the situation. Only three Spanish skippers have taken part in the Vendée Globe since the race was created in 1989 (José de Urgate, Unaï Basurko and Javier Sanso, editor’s note)… But I’m certain there have been many more, who would have liked to have competed (laughs)! Sailors like Alex Pella have tried in vain for years now. That’s why we are not limiting our search to Spain. We are contacting French firms, who may be interested by the Spanish market.”

“That’s entirely true… We have some good racers in the Volvo Ocean Race, the Barcelona, the America’s Cup, but very few sail solo. The problem is more general. Sailing as a sport is not as popular as in France and the media doesn’t talk about it very much. When I go to Les Sables d’Olonne for the start of the Vendée Globe, I’m surprised by the enthusiasm of the crowd. The man in the street knows all about the race and the skippers. Here in Barcelona, that is far from the case with the Barcelona World Race, even if things are gradually changing. After the last Barcelona, I got more coverage in the media. My project for the Vendée Globe could contribute to moving things forward.”