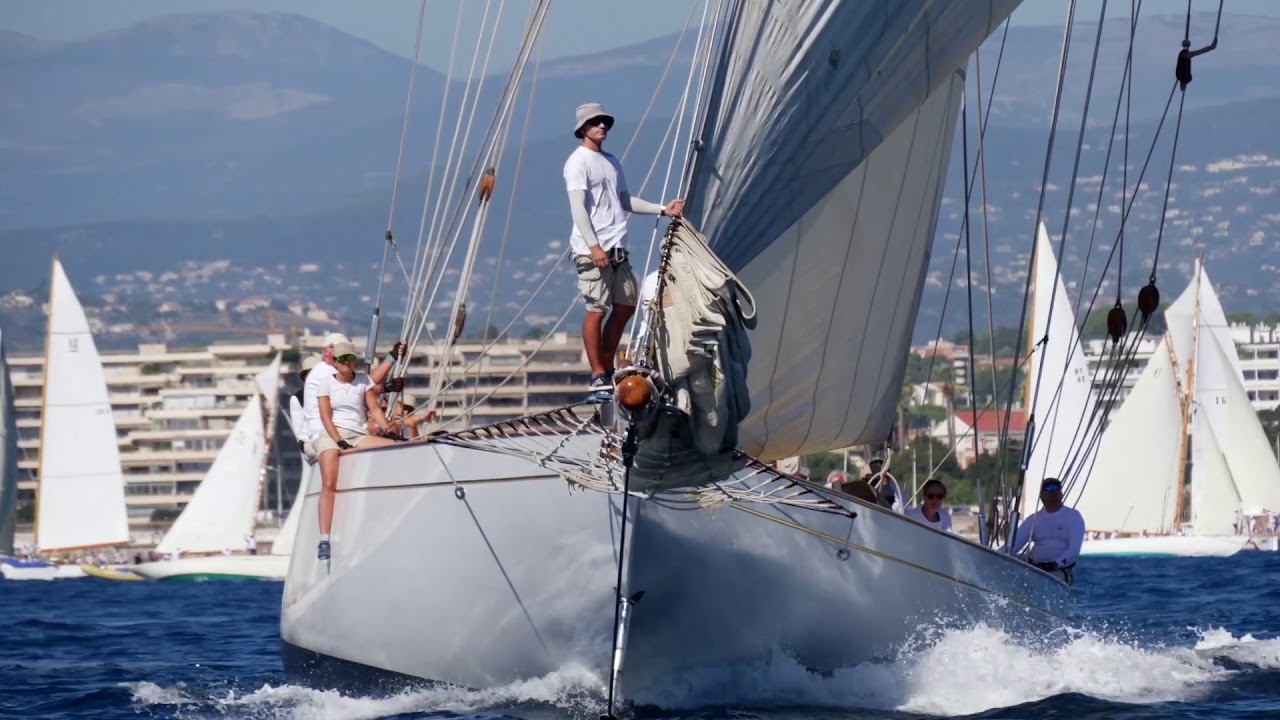 Gaff topsails, genoas, jibs, staysails, spinnakers, mainsails, mizzens… you name it, any size, any shape and kind of sail could be seen on the bay of la Napoule today, for Day 4 of the Régates Royales. Classic yachts, small and big, one-designs and metre classes profited from ideal conditions on yet another sunny and windy day.

A happy ending for the Russian Dragons, with Annapurna skippered by Anatoly Loginov, a veteran of the French event, to clinch the win on the last day. Tomorrow last and decisive day

200 boats, 12 classes, two race courses: the racing management of the Régates Royales is not small thing. Yet, on the bay of la Napoule and in the Golfe Juan, the racing went underway as if set by a metronome. 15 metre I.R. Mariska shocked all her competitors with a port start, a master stroke by tactician Christian Ponthieu and helmsman Sébastien Audigane. Unfortunately it was not enough to keep Moonbeam of Fife and Moonbeam IV at bay, and Mariska lies in second between the two Fife’s designs.

Among the gaff cutters Kismet and Kelpie swapped places from yesterday and are now tied at the top at 3 points with a comfortable advance on French Viola- this year celebrating her 110th birthday- that today only scored a fifth. In the Classic division the top two places are both occupied by Spanish-flagged boats, Argos and Yanira respectively, leading on France’s Arcadia while among the Classic Racers the local crew of Sagittarius lead on Italy’s Resolute Salmon and Il Moro di Venezia. In the big Marconi division, Argentina’s Cippino scored the second consecutive win and has a margin of two points on USA’s Santana and six on Blitzen. The schooner Mariette sits on top, advancing Elena of London and Naema. Finally, in the Spirit of Tradition class, star studded crew of Vanessa, with helmsman Torben Grael head on Freya and Scherzo. The BOD’s provisional podium is all British, with Six Stuart’s Guillemot in first, Tim Barrett’s Kite in second and Philip Harston’s Puffin in third.

Russians get to the peak again

What a fight! On the eve of the final day, the top three teams were separated by a mere 4 points. Blue Haze skippered by UK’s Ivan Bradbury, Anatoly Loginov’s Russian-flagged Annapurna and Germany’s NN helmed by Nicola Friesen went out on the Golfe Juan race course with all to play for. Thanks to a first in the very last race, it was the Russian team to successfully defend the title and be crowned 2018 champion, ahead of the British who only scored a disappointing tenth in the last race. The Germans got on the third step of the podium, albeit with only two points from Swiss Free, skippered by Dirk Oldenburg. A special mention goes to female skipper Gavia Wilkinson-Kox on Jerboa, who finished fifth and to the first French team, Ulysse helmed by Jean Berger.

Last chance tomorrow for the fleet to fight for the title in the 40th edition of the Régates Royales and to conquer the Panerai Trophy 2018. Start is scheduled for 11:00 am.

It’s Marigold’s age, the oldest boat in the fleet of the 40th Régates Royales. Easily recognisable by her dead straight bow and very raked stern, this gaff cutter was designed by charles Nicholson and built by the Camper & Nicholson Shipyard in 1892.  Despite a careful restoration, in the fist decade of the 21st century, Marigold is still faithful to her original spirit and has no electrical winches or equipment. A jewel from the 19th century that still sail and race to the day.

With her 32 metres of overall length, 7,25 metres of max beam and her two tall masts Mariette is one of the seven huge schooners designed by Nathaniel G. Herreshoff and launched in the USA between 1903 and 1915. This huge gaffer needs no less than 25 crew to handle the 1,030 square metres of sail surface. “Everyone has a role, no time to rest, and knows the boat well. The most complicated manoeuvre is on the approach of the downwind mark when you have to take down the spinnaker and the golly wobbler (a downwind sail hoisted on the top of the fore mast) and quickly hoist the jibs to go upwind.” Explains Charlie Wroe, boat captain on Mariette since 14 years. Eight sails to trim upwind, five downwind, the crew management is the key to success. “There are four different areas on deck: the cockpit , the main and fore mast and the bow. There is someone in charge for every area. We communicate via walkie-talkies because it is impossible to hear each other, especially where there are more than 15 knots of wind.” Says Charlie. There are five boats in the schooners division this year at the Régates Royales and Mariette is currently forerunner behind Elena of London, but still hoping to catch up in the coming races…