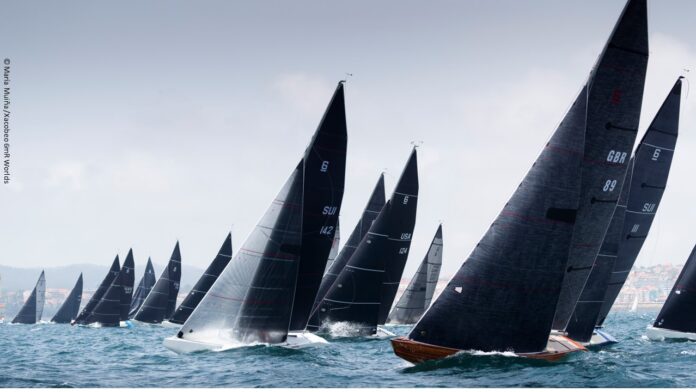 Sanxenxo (Spain) -The wind returned to Sanxenxo for the fourth day of the Xacobeo Six Metre European Championship 2022 and after two frustrating breezeless days the fleet was able to enjoy three fiercely fought races, races three to five in the eight-race series.

Conditions were light to moderate and at times shifty, making for a complex day on the water with plenty of opportunity for both big gains and big losses. Across the two divisions there were six different race winners, a few surprise results and even a visit from the local dolphins.

In the Open Division Dieter Schoen’s Momo from the Segelclub St Moritz did an impressive job of consolidating her lead, adding two second places and a sixth to her scorecard. Twelve points behind and jumping up the leader board from fourth to second is defending champion Philippe Durr and Rainer Müller’s Junior of the Club Nautique de Versoix, who got the wrong side of a big first beat shift to finish tenth in race three, but then followed up with a fourth and third. Rounding out the Open Division top three currently is Sanxenxo based Stella, being skippered this week by Juan Deben Tiscar. Stella also got the wrong side of the shift in race three and finished eleventh, but then won race four in style and was sixth in race five, giving her 29 points overall, four points behind Junior. 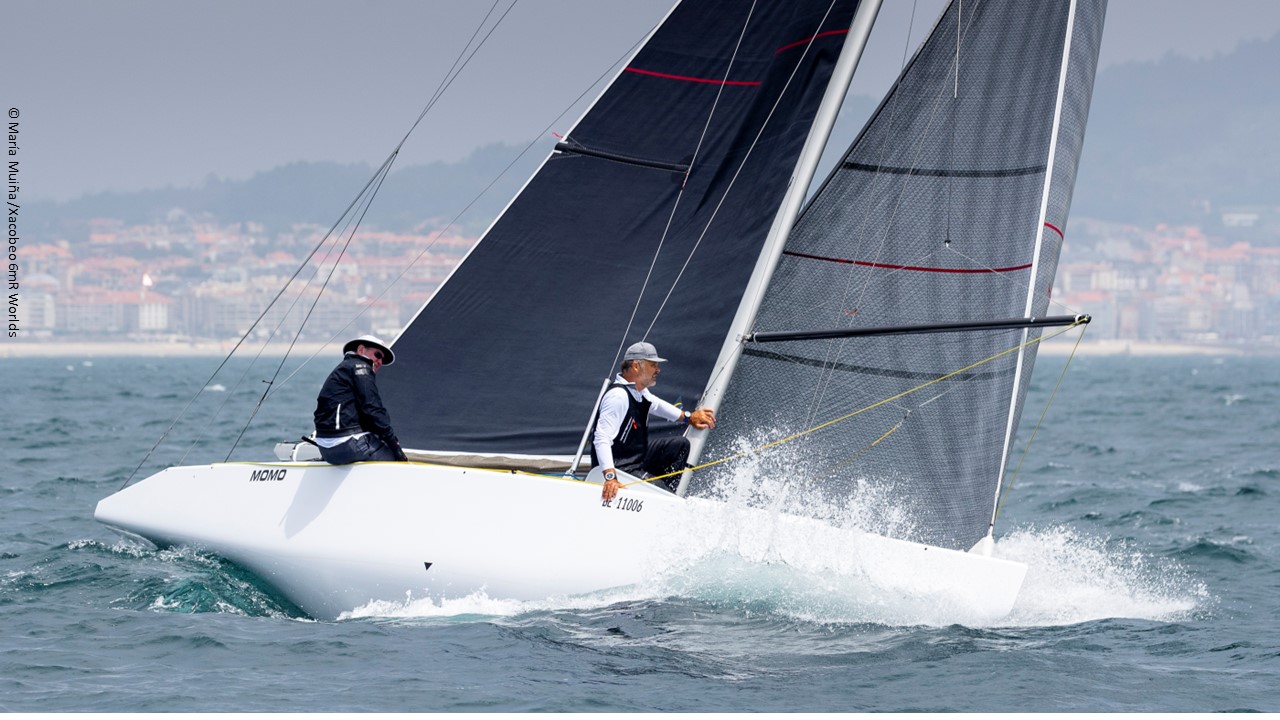 Ossi Paija’s Astree III of the Nyländska Jakt Clubben had a fantastic day in the Classic Division with two podium finishes – a third in race three and a confident win in race four, followed by a sixth in race five. As a result, this team move up from third to first overall. Just one point behind them lies Louis Heckly’s Dix Août of the Yacht Club de France, while three points adrift in third place is Francisco Botas Ratera sailing Aida for the Real Club Nautico Coruña.

Overnight Classics leader Pedro Campos Calvo-Sotelo aboard Bribon 500 started the day in fine form with a fourth and finished with a win, but he was disqualified from race four for being over the line early under the U Flag penalty system. Despite this Bribon 500 lies fifth overall, ten points adrift of the leader, and will no doubt be looking forward to the completion of race six tomorrow when the single discard will be introduced.

After sailing a happy Classics Fleet leader Ossi Paija summed up his day saying, “Today it was fantastic to go back sailing and it was pretty stable wind so we had three good races, two good results and one not so good, but we are quite happy.” 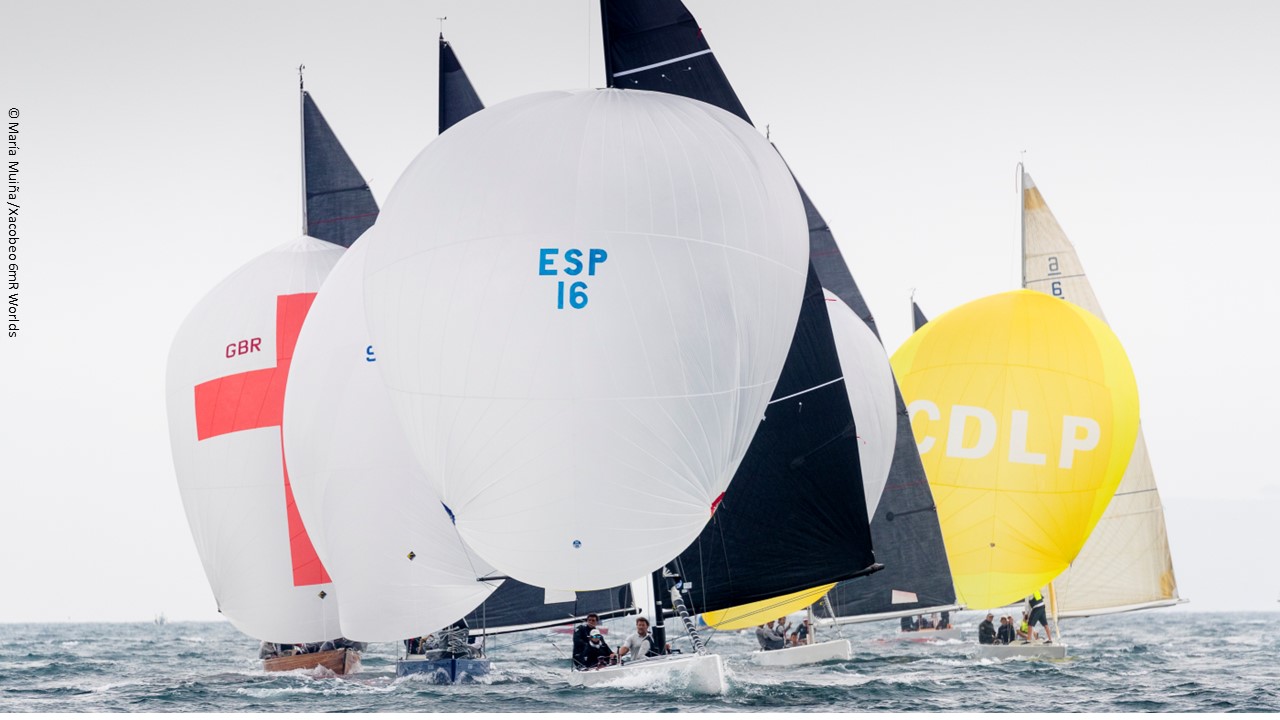 With the pressure on to catch up the schedule to secure the championship, which requires a minimum of five races, the Real Club Nautico de Sanxenxo race committee’s decision to bring the start of racing forward paid off and by 11:30 racing was underway in a building south westerly. Skies were initially overcast with misty low cloud and the wind built to around 12-15 knots, but then the sun began trying to burn off the cloud and when it did the wind started to shift left and drop, but then the cloud would roll back in again and the wind would go right and increased. Figuring out whether the sun was in the ascendance so left would pay or the clouds were winning so right was right was the key to success.

Back ashore the sailors were relieved to have a valid championship and to have enjoyed some of the intense racing for which the Six Metre class is famous. Momo’s owner Dieter Schoen was very happy with his day and spoke about what brought him to the class and his brand-new boat:

“I had a 5.5 Metre and before I had a Maxi 72 and for me it was clear I would stay with smaller boats. The 5.5 was a little bit too small for me and so we said we’d go for a Six Metre. So we talked to Vrolijk and Tobias Kohl, who also designed the other race boats we had, and we talked with [Christof] Wilke who built us the 5.5, an excellent boat yard in Switzerland and Tobias is a good boat designer, and Momo came out. We also got support and help from Philippe Durr of Junior about how the boat should look.

“I’m sailing with Markus [Wieser], Cheese [Dirk De Ridder], Ross [Halcrow] and Victor [Manuel Marino Prieto] now for I would say five or six years and we know each other quite well. The whole team I think is quite a good team and I’m sailing with excellent sailors, they are sailing on a lot of boats and we have a good relationship to each other and that’s the reason why we are sailing together again. It’s a competitive class with a lot of development that you can do on the Six Metre and this I like too.”

At the Race Village the Real Club Nautico de Sanxenxo’s legendary hospitality was once again in evidence as the crews kicked back after a great day on the water and enjoyed free live music by Chroma, ‘Lacón con grelos’ (pork shoulder with turnip tops) & drinks.

Up to three races remain to be sailed and the Race Committee has announced that the start time for the final day will be brought forward to 12:00. The forecast looks promising and with a final cut off start time of 16:00 there should certainly be time to run two and possibly all three races if wind conditions permit.