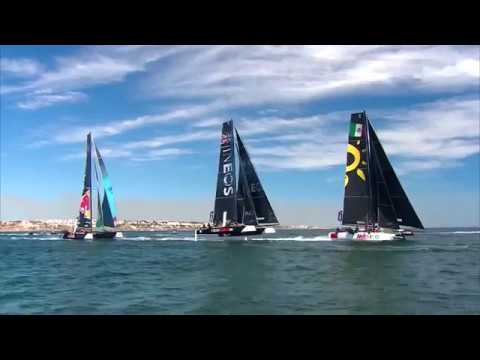 In just over a week, the Extreme Sailing Series™ fleet of flying GC32 catamarans will soar into San Diego from 18-21 October, for the penultimate Act of the 2018 global tour.

In just over a week, the Extreme Sailing Series™ fleet of flying GC32 catamarans will soar into San Diego from 18-21 October, for the penultimate Act of the 2018 global tour.

With the Californian sunshine beating down on their backs, the elite level sailors will be grafting hard for the Golden Coast Act trophy.

Following four Act wins so far this year, Swiss-flagged Alinghi will be striving for their fifth victory over the international fleet that they’ve battled since the first Act in Muscat, Oman, in March.

“We need to be consistent in San Diego this year,” stated Arnaud Psarofaghis, co-skipper and helm for the team. “We came short ten points on SAP Extreme Sailing Team in 2017, so we don’t want to repeat that. We are looking to win.”

Hot on their heels, and winners of last year’s San Diego Act and overall season, Danish squad SAP Extreme Sailing Team are keen to claw back some points before they hit the Series grand finale in Los Cabos, Mexico, at the end of the year.

“We’ve put a lot of time into analysing last year’s performance,” explained skipper, Rasmus Køstner. “It’s reminded us that there were a lot of small things we did very well in San Diego in 2017. We’ll be looking to repeat our winning performance this time around.”

Whilst this year has posed many challenges for Austrian counterparts Red Bull Sailing Team, San Diego could be their time to shine. With Roman Hagara and Hans Peter Steinacher – double Olympic gold medallists and Austria’s most successful summer sport athletes – back at the helm and trimming the mainsheet respectively, the team is hopeful for some strong results in the States.

“Racing in California, and especially San Diego, is amazing,” enthused Roman Hagara, pleased to be returning to the helm at a venue renowned for such excellent racing conditions. “The racing was outstanding in 2017 and it was great to see so many fans lining up on shore. With Hans Peter Steinacher and myself back on the GC32 for the penultimate stop of this year’s season , our goal is the podium in San Diego.”

Steinacher is equally as determined to score some serious points.

“We’re back here to podium once again,” he said with tenacity. “I for one am really looking forward to sailing the GC32 again, together with Roman and our young guns.”

Calm and collected, Team Oman Air skipper Phil Robertson is heading into the San Diego competition with a clear head.

“There’s no pressure for us,” he said coolly. “We just want to put in our best performance. We’re in third at the moment so the pressure is all on the guys in front of us.”

Currently just five points behind and giving Team Oman Air a run for their money, British INEOS Rebels are focussed and fixed on claiming back the Act podium; the team have not finished in the top three since the Portuguese Act that took place in Cascais in July.

“For the last two events we’ve been exchanging places with Oman Air,” said their 22-year old skipper, Will Alloway. “They’re one of the most experienced teams on the circuit. If we arrive with the correct mindset and it comes together on the course, we could easily push for that top spot.”

For the Series’ first and only Mexican contingent, Team México, San Diego offers an air of familiarity. Having sailed in the Californian city numerous times, skipper Erik Brockmann is raring to go, hoping to gain momentum before their home waters finale in Los Cabos.

“Ever since we started the campaign, securing strong results in San Diego and Los Cabos has always been our goal,” he explained. “San Diego is actually quite close to home for us – we’re expecting great support for Team México in the US, it’s going to be fun.”

The regulars on the circuit will be joined in San Diego by a local wildcard team. The crew will be announced in the coming days.

Extreme Sailing Series San Diego, presented by SAP, affords fans and spectators an action-packed experience, with a wide array of onshore and on-water entertainment showcased across the event. In addition to the headline GC32 racing, there will be kiteboarding, O’pen BIC youth sailing, Go Sea Quest on-the-water simulators, an extensive Race Village offering bars and food stalls, and much more.

VIP tickets are available and provide guests with varying levels of hospitality, from access to the VIP Extreme Club for the best views of the racing, to the Guest Sailor experience where ticket holders can board a GC32 to race with the competing teams.