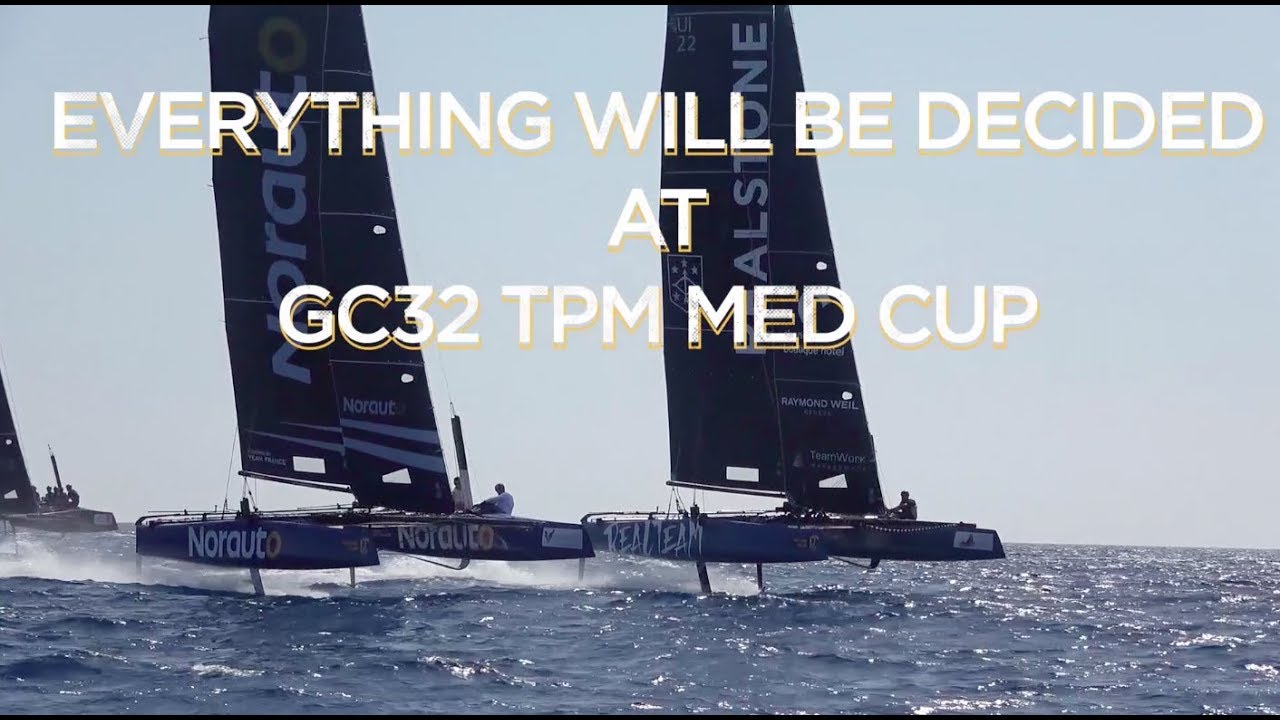 Winds had abated after yesterday’s storm off the Cote d’Azur, but sadly the sea state on the Rade de Toulon was considered too large for the nimble flying catamarans to race safely on day one of the GC32 TPM Med Cup. Following Toulon’s hosting of the America’s Cup World Series in 2016, the GC32 TPM Med Cup – also for flying catamarans and even including two teams from that event (Franck Cammas’ NORAUTO and Sir Ben Ainslie’s INEOS TEAM UK) – is being supported by Toulon Provence Mediterranée and the city of Toulon.

Last night at the Yacht Club de Toulon, teams competing at the GC32 TPM Med Cup attended an official opening ceremony where they were welcomed by Hubert Falco, President of Toulon Provence Méditerranée and Mayor of Toulon.

By mid-afternoon today the torrential rain had stopped and dark rain clouds were slowly being replaced by blue sky and occasional sun but there was no opportunity for racing.

Principal Race Officer Stuart Childerley explained: “The huge storm that went through yesterday from the east left a 2m sea state. The wind today has been really good – 10-15 knots from the east, but we have had two issues a) being able to crane the boats in and being able to moor them safely in the harbour and b) the large sea state outside.

“We gave the teams the options of launching today, but there are concerns with the conditions in the harbour if we leave the boats in the water overnight. Instead the plan is to launch boats tomorrow morning with the intention of racing on time at 1230. We hope that the sea state tomorrow will have reduced.”

2018 GC32 Racing Tour leader Franck Cammas, skipper of NORAUTO agreed with the decision: “It would have been tricky to race in these conditions because the waves are not in the same direction as the wind. On port gybe we would be jumping on every swell and would crash every time. But that’s life and it is not the first time this has happened. These boats fly and are like Formula 1 race cars – you can’t drive them in the sand.”

Simon Delzoppo, skipper of .film Racing, who has come all the way from Australia especially to race here in Toulon, added: “I think with the sea state there was a high risk of boats tipping over and being damaged. It is better to play it smart and go out tomorrow morning and get some good sailing in and come back in one piece.”

Like Cammas, Giles Scott, the Olympic Finn gold medallist, competing with Sir Ben Ainslie on INEOS Team UK, is racing here for the first time since the America’s Cup World Series event. “Today it was not too windy, but just getting the boats out… there are people surfing on breaking waves at the harbour entrance! Tomorrow it will be a similar wind strength, but hopefully the sea state will drop.”

Following the America’s Cup World Series event, with three French teams competing and much promotion around France’s third biggest Mediterranean port and capital of the Var department, a large spectator turn out is expected around the Rade de Toulon for the GC32 TPM Med Cup this weekend. Local organisers Sirius Events, run by Manfred Ramspacher has today been putting the finishing touches on the event’s race village at the Anse Tabarly – Plages Du Mourillon, adding to the spectator experience.

Simon Delzoppo, also President of the GC32 International Class Association, concluded: “Toulon is a great sailing venue – we have enjoyed the practice racing we’ve done here and the set-up is awesome with the village and the spectators. Now we just need to go sailing.”

A call will also be made tomorrow about whether it will be possible also to hold the first round of the ANONIMO Speed Challenge, where competitors sail a course comprising two reaches and a gybe. The team with the highest average speed for this will win an ANONIMO Nautilo GC32 Racing Tour limited edition timepiece on Sunday.